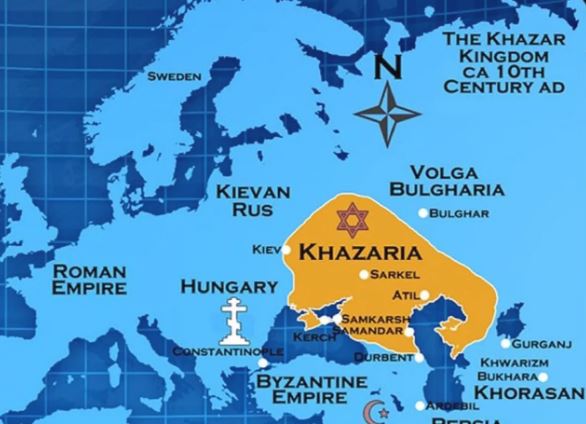 During a podcast Clif High made a tantalising comment: “In 1666 Sabbatai Zevi, he was a Khazarian and he was their messiah … [Zevi] said that it was okay for any of the Khazars to pretend to be a Jew but practise their true religion, which is this variant of Satan worship that has been inculcated into the Talmud in hidden language.”

Intrigued by this comment, we did a little digging into the Khazars and came across Dr Laura Sanger.  While we can’t guarantee you’ll believe it, we promise you won’t be bored.

Dr. Laura Sanger is a clinical psychologist and author.  On 22 March she joined Blurry Creatures podcast, hosted by Nate Henry and Luke Rodgers, to give her first public discussion on the Khazarians and what she believes is a hot bed of Nephilim Host breeding.  With what’s going on between Russia and Ukraine, understanding the history of Khazaria will hopefully bring more perspective to that conflict, Dr. Sanger said.

You can listen to the Blurry Creatures podcast, The Khazarian Kid(s) with Dr. Laura Sanger, HERE

The Khazarians were a violent, warlike people from Asia who migrated to the north end of the Caspian Sea in the 1st century BC. The Khazars were so violent they quickly amassed nearly 1,000,000 square miles by conquering the agrarian societies in the Caucasus region. The Khazarian kingdom encompassed what is now Ukraine and parts of Eastern Europe.

Putin aggressively worked at paying off the debt to the IMF, a Rothschild controlled bank, and by 2006 Russia’s debt to the IMF was paid off. Putin successfully extracted Russia from the strangle hold of the Rothschilds. For this heroic feat, Putin has been characterised as the bad guy ever since.

“Nephilim hosts” is a term Sanger coined in her book: ‘The Roots of the Federal Reserve: Tracing the Nephilim from Noah to the US Dollar’. She explained to Blurry Creatures, “Nephilim Hosts are individuals who have partnered with the spiritual forces of darkness to carry out the Nephilim agenda.”  An agenda to defile the human genome through the propagation of a hybrid race, the purpose of which is to overthrow God’s Kingdom.

At its the core, the Nephilim agenda has the goal to strip us of our humanity.  Sanger identifies four Nephilim traits: violent without remorse; engage in sexual degradation; dishonesty in trade and business transactions; and, traffickers in humans and enslavement of others.

According to Sanger the differences between Nephilim, Nephilim Hosts and demonised people are:

History of the Khazars

When it comes to Ukraine and the Khazars it’s unfortunate we cannot turn to history books because history is curiously silent about the Khazars. The reason why talking about Khazars is so sensitive is because it brings up the contentious question: who are the true Jews, the true children of God? A question that’s difficult to answer, said Sanger, and not one she would go into during this particular podcast.

Khazarians were forced to assimilate Judaism into their everyday lives.  One of the experts on Khazars was Benjamin Freedman, a Zionist operative who walked away from Zionism in 1945 and described the Khazars as a pagan nation and:

“The vile forms of sexual excess indulged in by the Khazars as their form of religious worship produced a degree of moral degeneracy that Khazar’s king could not endure. In the 7th century King Bulan…decided to abolish the practice of phallic worship…and selected the future state religion as… ‘Talmudism,’ and now known and practiced as ‘Judaism’.”

Another expert is Louis Finkelstein, a Talmud scholar, who stated that Pharisee doctrines and practices, or Pharisaism, became Talmudism and:

And Matthew Johnson, a former professor of history and political science who specialised in Russian and Ukrainian history, stated in his ‘Defending the Khazar Thesis of the Origin of Modern Jewry’:

“The Khazar theory suggests there is no connection between Israelites and Jews. Yet even if there were, the religion of the modern Jew bears no relationship whatsoever to the Israelite faith, which is vehemently condemned in the Talmud…In adopting the ethic of the Talmud, they adopted the mentality of the Pharisees, whose arrogance served as the early foundation of the Talmud.”

This Pharisee line, to this day, actively works to destroy Christ.  The Nephilims influence the Nephilim Hosts though the Khazarians.  When the mass conversion of Khazarians happened they implemented the Talmud, the Pharisaic teaching, in every part of society.

In ‘A Short Study of Esau-Edom in Jewry’ C.F. Parker concluded, and most historians at the time agreed, there are two categories of modern Jews: Ashkenazic Jews and Sephardic Jews.  One of the three elements making up Ashkenazi Jews were proselytes, or converts, including Khazarians.  Although a number of scholars and historians believe Ashkenazi Jews come from Germany, there is a growing body of evidence that points to their origins as Khazaria.

The Rothschilds and the Khazarian Mafia

“The Khazar empire had a small but powerful group of Jewish bankers in Kiev as early as the 10th century.”

The Regime: Usury, Khazaria and the American Mass, Matthew Johnson.

The Rothschilds were Ashkenazi Jews, Khazarians, “they’re arguably the most influential Nephilim Hosts of the Common Era,” Sangar said, “the Rothschild family and their Khazarian mafia have gained a foothold in almost every country since the mid-1700s.”

The patriarch for the Rothschild banking dynasty is Mayer Amschel Rothschild. He partnered with Adam Weishaupt who instituted the order of the Illuminati.  Together Rothschild and Weishaupt developed a seven-fold plan for world domination:

This plan has become the blue print to carry out the Nephilim agenda, Sanger said, this was rolled-out, at least, by Rothschild and Weishaupt in 1776.  This is essentially the play book of a Colour Revolution – destroy history, destroy the family unit. This is also World Economic Forum with a dash of communism.

Although it was a topic for another time, Sanger said, the Rothschilds were the treasurers for the Vatican so it filters down and does all connect.

How Can We Break Free from The System of Enslavement?

“As a psychologist I am also trying to raise awareness of the mind control that has really come over our generation,” Sanger said, “how have we become so hoodwinked, buying the narrative hook, line and sinker?”

It’s because of mind control tactics of the Nephilim Hosts.  For example, the situation with Russia and Ukraine. We have been conditioned to believe through corporate media narrative that “Russia is bad.”

What has been communicated to us about war is propaganda and that has been happening for centuries, Sanger said, “we’ve been consistently lied to by our media and our elected officials.  If we don’t do our own research and if we don’t use our critical thinking skills we just fall right into the trap.”

Orwell’s experience during the Spanish War is just one example of what happens to us during war time propaganda.

‘History stopped in 1936’, at which he nodded in immediate understanding. We were both thinking of totalitarianism in general, but more particularly of the Spanish civil war.

Early in life I have noticed that no event is ever correctly reported in a newspaper, but in Spain, for the first time, I saw newspaper reports which did not bear any relation to the facts, not even the relationship which is implied in an ordinary lie.

I saw great battles reported where there had been no fighting, and complete silence where hundreds of men had been killed. I saw troops who had fought bravely denounced as cowards and traitors, and others who had never seen a shot fired hailed as the heroes of imaginary victories; and I saw newspapers in London retailing these lies and eager intellectuals building emotional superstructures over events that had never happened.

I saw, in fact, history being written not in terms of what happened but of what ought to have happened according to various ‘party lines.

Nephilim Hosts like to boast about their plans, for example Henry Kissinger in 1992 who said:

If we think about who is currently supporting Ukraine and vilifying Russia, “we’ve got D.C. swamp, mainstream media and the woke populace that loves to virtue signal,” Sanger said, and “we ask ourselves: are these the people that we really want to trust?”  These are the same people who stripped us of our liberties for the sake of “flattening the curve” or they censored us because we were questioning “the science.”

So, if we use our critical thinking skills, the narrative that is being played out for us is most likely not even accurate. Putin kicked the Rothschilds central bank out of Russia several years ago, Sanger said, so that tells us that he’s not part of this Cabal system.

The Ukraine-Russia conflict has been used to move the populace from fear of Covid to fear of nuclear war.  It’s a weapon of mass distraction because they want to roll out their agenda that was developed in 1776.

Fear is the ultimate driver of mind control.  They want to keep us entrapped in fear because when we live in fear our ability to process nuanced information is impaired – we’re more likely to blindly follow others without using critical thinking skills.

Most often, “fear is a big fat liar” and the media plays a huge role as they will roll out stories that determine whether we should think something is risky, heightening people’s perception of risk, for example, daily death statistics shown by corporate media heightening our perception risk from Covid. 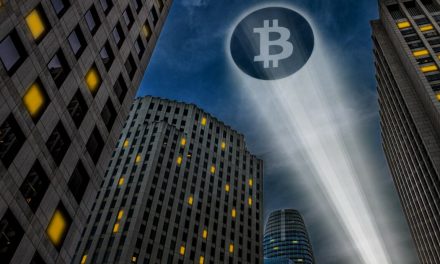 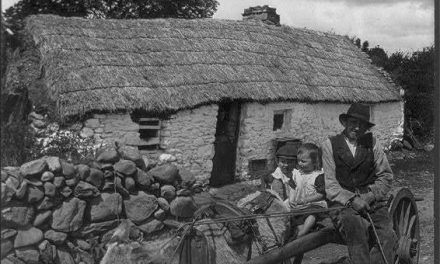 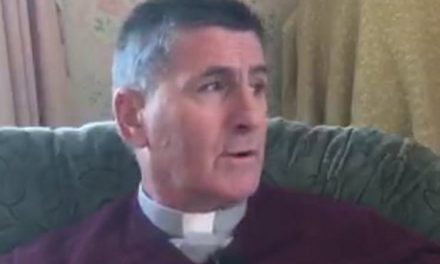 Cavan priest will not be ‘dictated to by pagan government’ 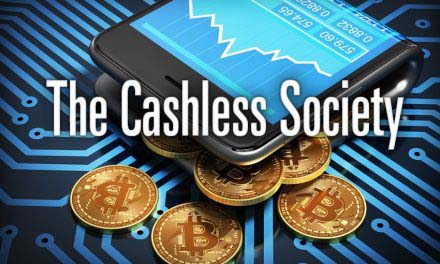