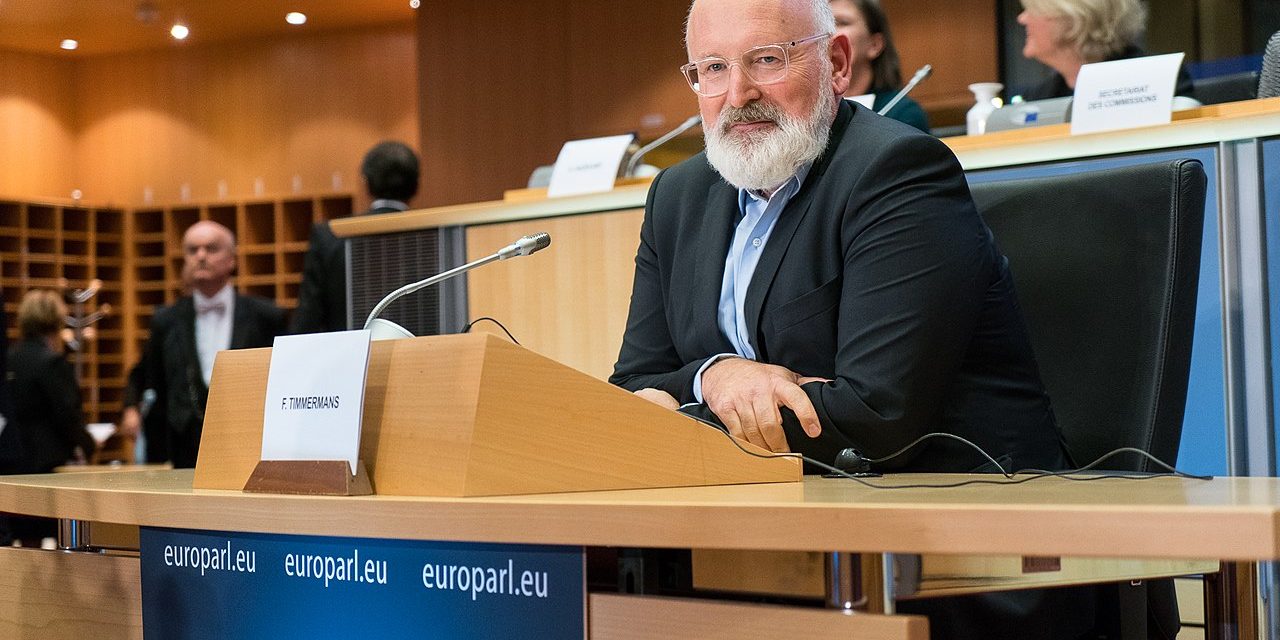 Whenever we hear the word “sustainable” we would be well-advised to take a critical look behind the nice sounding words. In the case of the globalist Agenda 2030 with its 17 sustainable goals by 2030, the one for creating a “sustainable agriculture”, when looked at closely, will destroy a huge part of EU agriculture production and drive already rising global prices for food far higher. The EU Commission calls their Green Deal for food the cute title, “Farm to Fork.” It is being backed by Klaus Schwab’s omnipresent World Economic Forum and their Great Reset.

Keep in mind that sustainable as defined by the UN and Davos World Economic Forum means achieving Zero Carbon emissions by 2050. Yet there is no scientific study independently proving that CO2 is endangering our planet by creating global warming. Only myriads of dubious, well-funded computer models. The harmless gas is essential to all human, animal and all plant life. Now the European Union Commission is pushing a top-down radical agenda on the agriculture heart of the world’s second most important food producer as part of its ill-conceived EU Green Deal. If implemented as is likely, it will cause drastic reduction in crop outputs, a severe reduction in meat protein and, perhaps most dangerous, an overturning of current EU law regulating new gene-edited crops, or GMO.2. That will have global consequences.

In May 2020 the EU Commission released its Farm to Fork Strategy. The official Brussels rhetoric makes it sound like a food nirvana is coming. They state, “The Farm to Fork Strategy is at the heart of the European Green Deal, aiming to make food systems fair, healthy and environmentally-friendly.” Wow, that sounds super.

They then get to the real agenda: “We need to redesign our food systems which today account for nearly one-third of global GHG (Green House Gas) emissions, consume large amounts of natural resources, result in biodiversity loss and negative health impacts…” This is a clever way of demonizing farmers and our food production as CO2 violators. The solution? “New technologies and scientific discoveries, combined with increasing public awareness and demand for sustainable food, will benefit all stakeholders.” What new technologies will be explained.

How do the unelected bureaucrats in Brussels plan to “redesign our food systems” to eliminate one-third of global greenhouse gas emissions by 2050? By forcing farmers to go bankrupt by demanding new costly inputs to production and radical new genetic manipulated patented plants with unproven safety. Above all they plan to lift the current de facto ban on gene-edited plant cultivation. For those who do not know, it is the same unproven risky technology used in the COVID-19 vaccines of the Pfizer and Moderna mRNA gene-edited vaccines using CRISPR.

EU Commissioner for Agriculture, Janusz Wojciechowski, says of the Farm to Fork Green Agenda, “Farmers will need to radically transform their production methods and make the best use of technological, digital, and space-based solutions to usher in the new agricultural transition.” So they plan a radical transformation. Already this sounds ominous.

To raise the share of pesticide-free organic farming to 25% of the EU total at the same time reducing chemical pesticide use by 30% by 2030 sounds great to the uninformed. Like the claims of Monsanto and the GMO industry that their GMO crops reduce need for pesticides, it is a lie. The EU is using this as bait to introduce a radical change in strict current EU rules for allowing approval of gene-edited plants and animals into agriculture. In their May 2020 document on Farm to Fork Green Deal, the EU states that the Commission is “carrying out a study which will look at the potential of new genomic techniques to improve sustainability along the food supply chain.” This means gene-editing, CRISPR/Cas9 genetic modification.

In April this year, the EU Commission released that study on New Genomic Techniques (NGTs). NGTs are producing gene-edited plants and even animals. The report claims that NGTs, “techniques to alter the genome of an organism, have the potential to contribute to a more sustainable food system as part of the objectives of the European Green Deal and the Farm to Fork Strategy.” The report calls for a “public debate” to change the strict EU laws on approval of GMO crops that require extensive testing and labelling of GMO crops.

That law from 2001 has successfully restricted use of GMO across the EU in contrast with the USA where unregulated GMOs are dominant for key crops. In 2018 the European Court of Justice, the EU court, ruled that Gene-edited crops should be subject to the same stringent regulations as first-generation genetically modified (GMO) organisms. The key to the Davos and EU Farm to Fork Agenda is a radical reduction in pesticides to be replaced by gene-edited crops allegedly able to replace pesticides.

The EU Commission, in cahoots with Bayer-Monsanto and others of the GMO agribusiness lobby, are working hard to remove that court restriction. Commissioner for Health and Food Safety, Stella Kyriakides, said of their April EU study, “The study we publish today concludes that New Genomic Techniques can promote the sustainability of agricultural production, in line with the objectives of our Farm to Fork Strategy.” New Genomic Techniques is the euphemism for gene-edited crops.

EU Vice President responsible for the Green Deal, Franz Timmermans, has openly admitted the lure of promising huge cuts in pesticides, implying it will come from abolishing restrictions on gene-editing. He told a recent EU Green Week conference that the EU aims to give farmers the tools to adopt precision agriculture and to leverage scientific discoveries to optimize seeds: “That’s how we limit our dependency on pesticides.” Precision agriculture and scientific discoveries to optimize seeds is Brussels doublespeak for massive introduction of unregulated gene-editing. He continued, “Going to ecological farming doesn’t mean we all have to munch on grass and live in caves, we need to use the latest technology to get us there.” That means gene-editing CRISPR.

Translated into plain English, the heart of Farm to Fork is the planned overturning of the 2018 ECJ court ruling that treats CRISPR gene-edited plants or animals under the same strict “precautionary principle” rules for GMO. With no restrictions, gene-editing companies like Bayer-Monsanto will be free to introduce experimental and unproven genetically altered plants and animals into our diet with no labelling.

Such a gene-edit-free regime already exists in the USA where the USDA and regulators allow CRISPR gene-edited soy oil, mushrooms that don’t brown, wheat with more fiber, better-producing tomatoes, herbicide-tolerant canola and rice that doesn’t absorb soil pollution as it grows. Gene-edited US projects on fish and animals include such dubious ones as cows that only have male calves, using CRISPR; Pigs that don’t need castration; hornless dairy cows and growth-enhanced catfish using CRISPR to develop catfish with more muscle cells. It makes the mouth water…

The major lobbying push to remove EU regulations on gene-edited crops or animals is coming from Bayer-Monsanto and the other GMO agribusiness giants including Syngenta, BASF, and DowDupont’s Corteva. In November 2020 Liam Condon, the President of Bayer-Monsanto crop science division told a Bayer Future of Farming conference, that Bayer is lobbying “very strongly” to change the EU’s GMO regulations to exempt gene editing. Condon said, “[We are] promoting very strongly that regulations should catch up with technology and allow this technology to be used, [not only] for the benefit of Europeans, but also for the benefit of others all over the world who look to Europe for regulations.” Condon called gene editing and CRISPR technology an “amazing breakthrough” that would allow agriculture to be more sustainable. What he omitted was that deregulating gene-edited crops will allow Bayer-Monsanto and other major GMO companies to charge farmers for their patented “sustainable” seeds.

Gene-editing of plants or animals is not at all risk-free as claimed. The technology is not at all precise or controlled and often has unpredicted outcomes such as unintended genetic alteration, even the inadvertent addition of foreign DNA from other species, or even entire foreign genes, into the genome of gene-edited organisms.

This is still a new experimental technology. Its advocates such as Bayer-Monsanto claim that gene editing of plants is precise. Yet investigation finds that far from proven. Dr. Allison K Wilson of The Bioscience Resource Project, states, “plant gene editing methods are also prone to introducing UTs (Unintended Traits or genetic damage)…new evidence from both animals and plants indicates that gene editing itself can result in unintended mutations at or near the target site. These include the insertion of vector, bacterial, and other superfluous DNA, and the unintended introduction of large DNA deletions and rearrangements.”

These are not minor flaws that can be ignored. Wilson concludes, “plant gene editing outcomes are imprecise and unpredictable, and that, depending on the combination of techniques used, gene editing can be highly mutagenic. While in theory it might someday be possible to create a GM crop that meets the broad requirements of sustainable agriculture, in practice this seems highly unlikely to ever happen.”

According to an analysis of the EU Farm to Fork strategy by Global Ag Media, “the effect of these strategies will be an unprecedented reduction of EU production capacity and of its farmers’ income. All sectors show declines in production of 5% to 15%, with the livestock sectors being the most heavily impacted… Meanwhile, whatever the scenario, production prices show a net increase of around 10% with a negative impact for most farmers’ incomes. ” The EU farmers’ union, Copa-Cogeca warns the policy will result in an unprecedented reduction in agriculture capacity. But that’s the real intent of “sustainable agriculture.”

Davos and EU Farm to Fork

The radical EU Farm to Form Green agenda finds its echo in the Davos World Economic Forum which already in 2014 promoted what it called, “Enabling Trade: From Farm to Fork.” A January 2018 WEF report states, “Gene-editing technologies such as CRISPR-Cas could provide a way to achieve multi-trait improvements, producing a step change in productivity while improving the drought resistance and nutritional content of food. “ This was done together with McKinsey & Co as part of the WEF Food Security and Agriculture Initiatives and their Great Reset. WEF Forum Partners include Bayer, Syngenta, BASF. According to the WEF website, “The World Economic Forum at its Annual Meeting in Davos in January 2020 brought together leaders from industry and business with Executive Vice-President Frans Timmermans to explore how to catalyze the European Green Deal.” Bayer’s Liam Condon was also there as was the head of Syngenta and BASF.

If the EU agriculture sector is brought into the gene-edited GMO regime and its production radically reduced as a consequence, it will drive ever greater food shortages around the world. This is the Davos plan along with their COVID-19 eugenics Great Reset agenda. Calling it Farm to Fork makes it sound harmless. It clearly is not. 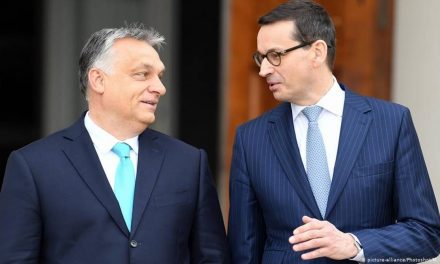 Hungary and Poland have no choice but to stand together 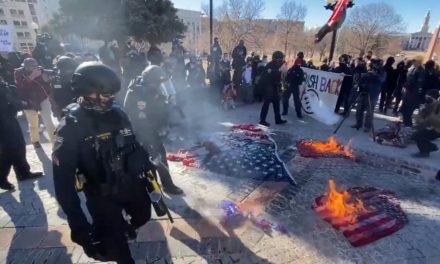 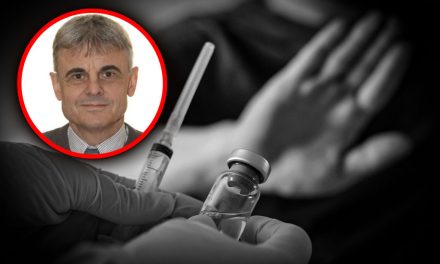