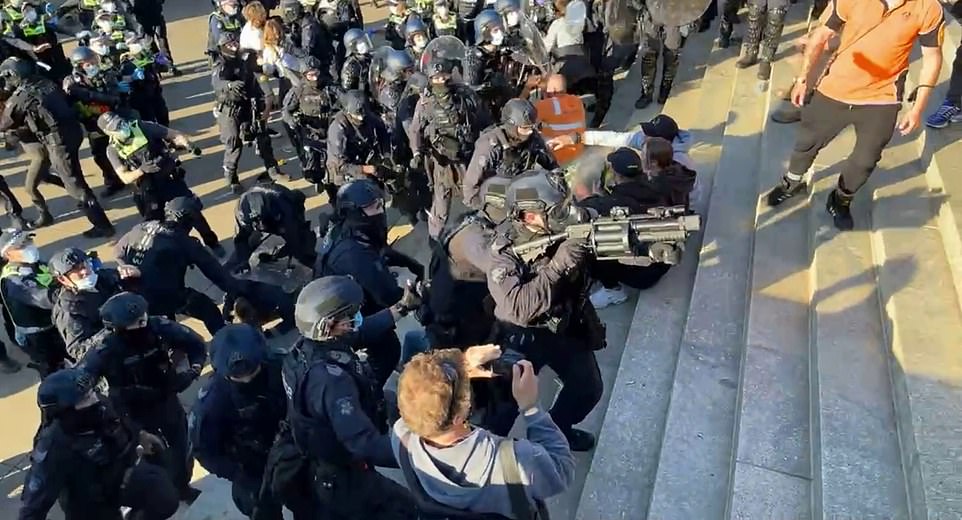 A recent video from Australia shows a civilian questioning a police officer dressed in riot gear as to why he was acting the way he was against the people.

The excuse given by this ‘police officer’ is that his wife has lost her job and he has to pay a mortgage. This is his irrational excuse as to why he’s prepared to carry out criminal instructions from his superiors. He seems to know that the orders he’s carrying out are unjustified and admits he doesn’t want to do what he’s doing, but he has to or he will lose his job and his salary.

This is simply a pathetic excuse for cowardice.

The gentleman reminds him that he doesn’t have to do anything. He is in fact choosing to carry out illegal orders simply for money.

He is nothing but a hired thug, normally described as a mercenary, but in this case I would go further. He is a coward indulging himself in brutality against his own people using the justification that he has bills to pay and thus this excuses the brutality he is dishing out from the barrel of a gun against peaceful protesters who have already lost their jobs, relationships, homes and other normal assets of life, many also taking their own lives as a consequence.

This coward is typical of police, medical staff, unelected bureaucrats, treasonous politicians and particularly the media who have consistently lied to the public in every aspect of the Covid-19 hoax and have used it to their own advantage; purely financial of course they’ll tell you, but I think there’s more to it.

There is no amount of money, or any high ranking job for that matter, which would make me lie on such a grand scale resulting in the deaths of innocent people. There is no amount of cash which would make me go out on the streets on a daily basis, armed to the teeth and protected in armour, to beat and shoot at children who simply want their freedom and future secured from tyranny; tyranny which this coward is imposing.

What these fools don’t seem to understand, and perhaps their lack of any rational or critical thinking is part of the problem, is that if this whole system is brought crashing to its knees by the actions of honest police officers and other order followers, they will no longer have a mortgage to pay. Those days will be gone along with the criminal financial system. They will still have their jobs, all except the treasonous politicians and every other criminal element or organisation involved in the drive towards Great Reset tyranny, including police officers and medical staff who have been directly responsible for serious crime, including brutality against their own people and, in the case of medical staff, cold blooded murder.

A new system will have to be built out of the ashes of the old, but not the system of Klaus Schwab or Bill Gates. Those types of degenerates will not survive the fatal purge which is sure to happen if enough people start to act with their conscience instead of their need for money.

There is no price which can be put on morality. It is a choice.