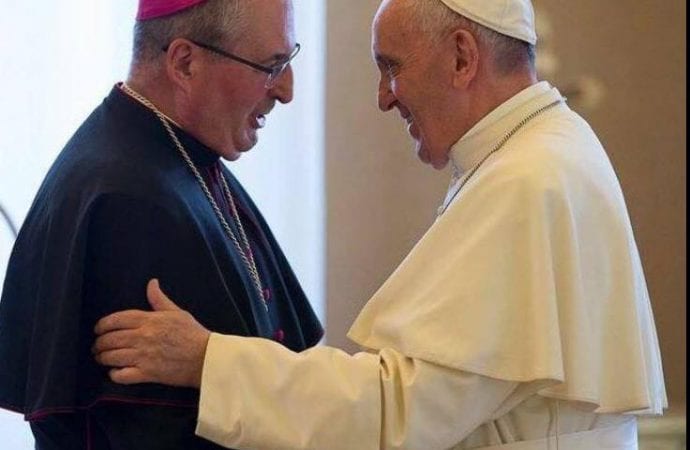 ROSARIO, Argentina — A South African who’d been tapped by Pope Francis to replace Cardinal Wilfried Napier as archbishop of Durban died on Sunday of COVID-19.

Archbishop Abel Gabuza was appointed by Francis as coadjutor of Durban in Dec. 2018, and had been in the hospital at least since Jan. 10, when Napier shared on Twitter that his coadjutor had tested positive for COVID-19 and was in the ICU.

“The Archbishop had not been with us in Durban long – just short of two years – but in that time we came to recognize him as a gentle, caring and warm-hearted pastor,” Napier said in a statement released on Sunday morning, soon after Gabuza’s death. “Through his gentleness, caring and warmth, he made an immediate impact on everyone who was privileged to make his acquaintance. That’s an added reason why his passing is such a tremendous loss to us and the entire Church in Southern Africa.”

His death comes after ten bishops died in the week of Jan. 8-14 after testing positive with the coronavirus.

The youngest of the prelates who died in the week of Jan. 8-Jan 14 was Bishop Moses Hamungole (53), from the diocese of Monze, in Zambia. The oldest was Italian Archbishop Oscar Rizzato (91), the papal almsgiver during the pontificates of St. John Paul II and Pope Benedict XVI.

Retired Brazilian Cardinal Eusebio Scheid, 88, died in the interior of São Paulo state Jan. 13, after only a few days in the hospital with COVID-19. He is pictured in an undated photo. (Credit: CNS photo/Courtesy Sao Jose dos Campos City Government.)

As is customary when a cardinal passes, Francis sent a telegram to Cardinal Orani Joao Tempesta, archbishop of Rio, expressing his closeness during this time “of mourning.” In the note, Francis highlighted the episcopal motto of Scheid: “God is Good.”

“He reminded us of the goodness of God with his Church, being this a true consolation when we remember Dom Eusebio, who with such generosity served the people of God,” Francis said.

Brazil has the second highest number of COVID-19 deaths after the United States, with over 207,000.

Francis also sent a telegram after Rizzato’s death, calling him “vigilant and courteous.”

The telegram goes on to praise the late prelate as “thoughtful and happy in his pastoral collaboration, especially in the administration of the Sacraments of Christian initiation,” and also as a “discreet servant of the Church who, cultivating the interior life and attention to the weakest, carried out his ministry with humility and dedication.”

The first prelate to die during the week was Bishop Cástor Oswaldo Azuaje Pérez, (69), from Trujillo, Venezuela. He was the first Venezuelan bishop to die of COVID-19, though at least eight priests and several religious sisters have died from the virus in the country.

Bishop Luis Adriano Piedrahita Sandoval (74) of Santa Marta, Colombia, died on Jan. 11. Hospitalized since Dec. 23, he is the first Colombian bishop to die of COVID-19, and did so as a second wave surges in the country, with an average daily death toll of 400, which led the government of Ivan Duque to impose new restrictions.

Tartaglia had served as leader of Scotland’s largest Catholic community since 2012. He had tested positive for COVID-19 after Christmas and was self-isolating.

Admired by friends and foes, his death was marked with sadness by Nicola Sturgeon, First Minister of Scotland.

“I am very sorry to hear this news. Archbishop Tartaglia was a fine man who was much loved within the Catholic community and beyond. I always valued my interactions with him and he will be greatly missed. My thoughts are with his loved ones & wider community. May he rest in peace,” she said on Twitter.

The other prelates who died in the week of Jan. 8-14 were Polish Bishop Adam Dyczkowski (88) emeritus of Zielona Góra-Gorzów diocese-he passed Jan. 10; and Bishop Florentin Crihalmeanu (61) of the Greek-Catholic Eparchy of Cluj-Gherla in Romania, who passed Jan. 12.

In addition to those who passed, Mexican Cardinal Norberto Rivera Cabrera, former archbishop of Mexico City, was hospitalized on Saturday, after testing positive with COVID-19.

The archdiocese released a statement asking for prayers for the Rivera, as well as all people affected by the coronavirus.

An estimated 140,000 have died in Mexico due to this disease, including close to 100 priests – the latest being Fathers José Guadalupe Sanguino Fuentes (88) and Valentín Ramírez Tlaque (68), from the archdiocese of Puebla. Both passed away last Wednesday.