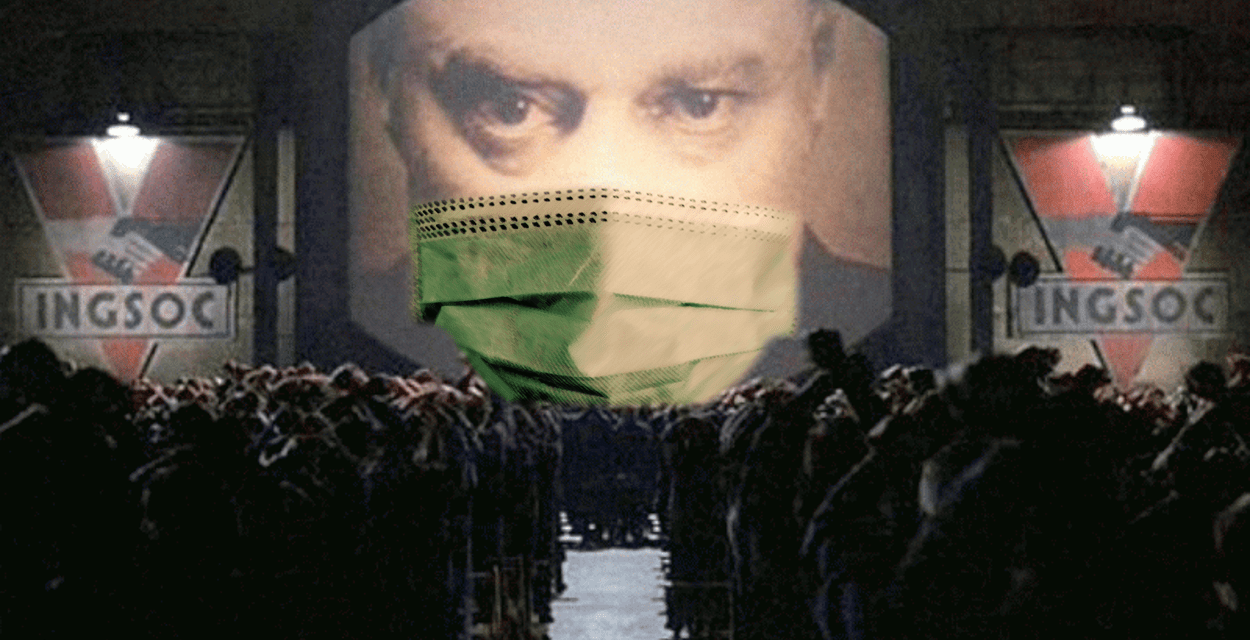 It was always going to come to this … mobs of hysterical, hate-drunk brownshirts hunting down people not wearing masks and trying to get them fired from their jobs, “no mask, no service” signs outside stores, security staff stopping the mask-less from entering, paranoid pod people pointing and shrieking at the sight of mask-less shoppers in their midst, goon squads viciously attacking and arresting them…

Welcome to the Brave New Normal.

And it isn’t just the Maskenpflicht-Sturmabteilung. The new official narrative is omnipresent. The corporate media are pumping out hysteria about “Covid-19 hospitalizations” (i.e., anyone admitted to a hospital for anything who tested positive for the coronavirus) and “major incidents” (i.e., people at the beach).

Police are manning makeshift social-distancing-monitoring watchtowers in London. There are propaganda posters and billboards everywhere, repeating the same neo-Goebbelsian slogans, reinforcing the manufactured mass hysteria. Dissent and nonconformity are being pathologized, “diagnosed” as psychopathy and paranoia. Mandatory vaccinations are coming.

You didn’t think they were kidding, did you, when they started introducing the Brave New Normal official narrative back in March?

They told us, clearly, what was coming. They told us life was going to change … forever. They locked us down inside our homes. They ordered churches and synagogues closed. They ordered the police to abuse and arrest us if we violated their arbitrary orders. They closed the schools, parks, beaches, restaurants, cafés, theaters, clubs, anywhere that people gather.

They ripped children out of their mother’s arms, beat and arrested other mothers for the crime of “wearing their masks improperly,” dragged mask-less passengers off of public buses, gratuitously beat and arrested people for not “social-distancing” on the sidewalk, shackled people with ankle monitors, and intimidated everyone with robots and drones.

They outlawed protests, then hunted down people attending them and harassed them at their homes. They started tracking everyone’s contacts and movements. They drafted new “emergency” laws to allow them to forcibly quarantine people. They did this openly. They publicized it. It’s not like they were hiding anything.

No, they told us exactly what was coming, and advised us to shut up and follow orders. Tragically, most people have done just that. In the space of four months, GloboCap has successfully imposed totalitarianism — pathologized totalitarianism — on societies all across the world. It isn’t traditional totalitarianism, with a dictator and a one-party system, and so on. It is subtler and more insidious than that. But it is totalitarianism nonetheless.

GloboCap could not have achieved this without the approval (or at least the acquiescence) of the vast majority of the masses. The coronavirus mass hysteria was a masterstroke of propaganda, but propaganda isn’t everything. No one is really fooled by propaganda, or not for long, in any event. As Gilles Deleuze and Félix Guattari noted in the opening of Anti-Oedipus:

The masses were not innocent dupes. At a certain point, under a certain set of conditions, they wanted fascism, and it is this perversion of the desire of the masses that needs to be accounted for.”

I am not going to try to account for the “perversion of the desire of the masses” here in this essay, but I do want to dig into the new pathologized totalitarianism a little bit.

Now, I’m going to assume that you understand that the official “apocalyptic pandemic” narrative is predicated on propaganda, wild speculation, and mass hysteria, and that by now you are aware that we are dealing with a virus that causes mild to moderate symptoms (or absolutely no symptoms at all) in 95% of those infected, and that over 99.5% survive … thus, clearly, no cause for widespread panic or justification for the totalitarian “emergency measures” that have been imposed.

I am also going to assume that you watched as GloboCap switched off the “deadly pandemic” to accommodate the BLM protests, then switched it back on as soon as they subsided, and that you noted how their propaganda shifted to “cases” when the death count finally became a little too embarrassing to continue to hype.

So, I won’t waste your time debunking the hysteria. Let’s talk pathologized totalitarianism.

The genius of pathologized totalitarianism is like that old joke about the Devil … his greatest trick was convincing us that he doesn’t exist. Pathologized totalitarianism appears to emanate from nowhere, and everywhere, simultaneously; thus, technically, it does not exist. It cannot exist, because no one is responsible for it, because everyone is.

Mass hysteria is its lifeblood. It feeds on existential fear. “Science” is its rallying cry. Not actual science, not provable facts, but “Science” as a kind of deity whose Name is invoked to silence heretics, or to ease the discomfort of the cognitive dissonance that results from desperately trying to believe the absurdities of the official narrative.

The other genius of it (from a GloboCap viewpoint) is that it is inexhaustible, endlessly recyclable. Unlike other official enemies, the “deadly virus” could be any virus, any pathogen whatsoever. All they have to do from now on is “discover” some “novel” micro-organism that is highly contagious (or that mimics some other micro-organism that we already have), and wave it in front of people’s faces. Then they can crank up the Fear Machine, and start projecting hundreds of millions of deaths if everyone doesn’t do exactly as they’re told.

They can run this schtick … well, pretty much forever, anytime the working classes get restless, or an unauthorized president gets elected, or just for the sheer sadistic fun of it.

Look, I don’t mean to be depressing, but seriously, spend an hour on the Internet, or talk to one of your hysterical friends that wants to make mask-wearing mandatory, permanently. This is the mentality of the Brave New Normal … irrationally paranoid and authoritarian. So, no, the future isn’t looking very bright for anyone not prepared to behave as if the world were one big infectious disease ward.

I’ve interacted with a number of extremely paranoid corona-totalitarians recently (just as a kind of social experiment). They behave exactly like members of a cult.

When challenged with facts and basic logic, first, they flood you with media propaganda and hysterical speculation from “medical experts.” Then, after you debunk that nonsense, they attempt to emotionally manipulate you by sharing their heartbreaking personal accounts of the people their therapists’ brother-in-laws’ doctors had to helplessly watch as they “died in agony” when their lungs and hearts mysteriously exploded.

Then, after you don’t bite down on that, they start hysterically shrieking paranoia at you (“JUST WAIT UNTIL THEY INTUBATE YOU!” … “KEEP YOUR SPITTLE AWAY FROM ME!”) and barking orders and slogans at you (“JUST WEAR THE GODDAMN MASK, YOU BABY!” … “NO SHOES, NO SHIRT, NO MASK, NO SERVICE!”)

Which … OK, that would be kind of funny (or terribly sad), if these paranoid people were not just mouthpieces echoing the voice of the official power (i.e., GloboCap) that is transforming what is left of society into a paranoid, pathologized, totalitarian nightmare right before our eyes. They’re kind of like the “woman in red” in The Matrix. When you are talking to them, you’re not talking to them. You’re talking to the agents. You’re talking to the machines. Try it sometime. You’ll see what I mean. It’s like talking to a single algorithm that is running in millions of people’s brains.

I can’t lie to you. I’m not very hopeful. No one who understands the attraction (i.e., the seduction) of totalitarianism is. Much as we may not like to admit it, it is exhilarating, and liberating, being part of the mob, surrendering the burden of personal autonomy and individual responsibility, fusing with a fanatical “movement” that is ushering in a new “reality” backed by the sheer brute force of the state … or the transnational global capitalist empire.

It is irresistible, that attraction, to most of us. The chance to be a part of something like that, and to unleash one’s hatred on those who refuse to go along with the new religion … to publicly ridicule them, to humiliate them, to segregate them from normal society, to hunt them down and get them fired from their jobs, to cheer as police abuse and arrest them, to diagnose them as “abnormal” and “inferior,” these social deviants, these subhuman “others,” who dare to challenge the authority of the Party, or the Church, or the State, or the Reich, or Science.

Plus, in the eyes of GloboCap (and its millions of fanatical, slogan-chanting followers), such non-mask-wearing deviants are dangerous. They are like a disease … an infestation. A sickness in the social body. If they refuse to conform, they will have to be dealt with, quarantined, or something like that.

Or they can just surrender to the Brave New Normal, and stop acting like babies, and wear a goddamn mask.

After all, it’s just a harmless piece of cloth. 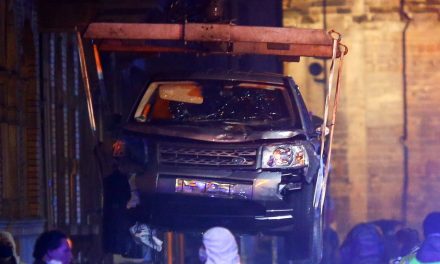 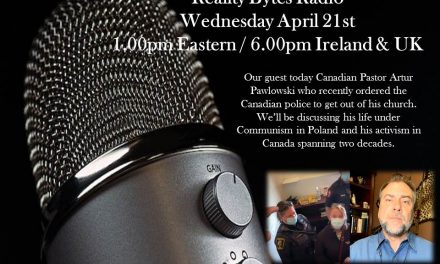 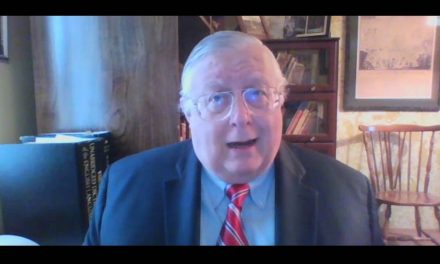