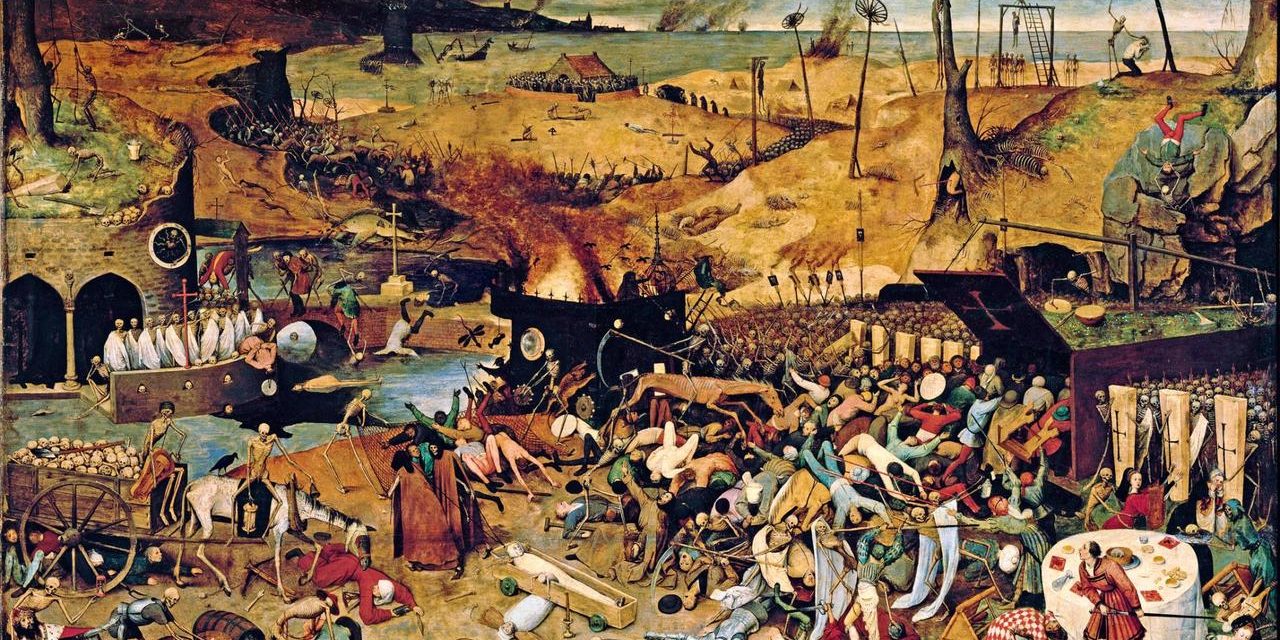 Authored by Wayne Madsen via The Strategic Culture Foundation,

The post-Covid international geo-political structure may resemble that which followed the most lethal pandemic that affected the world – the highly contagious Black Death of the 14th century. The bubonic plague killed between 75 and 200 million people in Asia, Europe, and North Africa. It is believed the bubonic/pneumonic plague was carried by black rat flea parasites that travelled to Europe and the Middle East first via the Silk Road from China and then on Genoese merchant ships sailing from Crimea. The fleas spread from their rodent hosts to humans. An eerie connection to Covid-19 is that among the first victims of the Black Death were 80 percent of the population of Hubei province, including the town of Wuchang, present-day Wuhan.

By the end of 1346, India had been largely depopulated and dead bodies were reported to have covered Tartary, Mesopotamia, Syria, and Armenia. In 1345, Damascus was recording 2000 deaths a day. By 1349, the plague had spread through Italy, France, Spain, Germany, England, Scotland, Ireland, Norway, and even far-off Iceland and Greenland. Only regions that had little contact with other countries through trade were relatively spared. These included the Basque region and isolated pockets in the Alpine, Pyrenees, and Atlas mountain ranges. The plague returned in follow-on phases from the 15th to 17th centuries. France lost a million of its citizens in just four years, between 1628 and 1631.

Without a suitable vaccine to fend off Covid-19, the world may copy the effects that the Black death had on geo-politics, trade, the economy, and social structure.

Just as with the current scapegoating of Covid-19 to blame Asians, Muslims, Jews, and other minorities, the Black Death also saw its share of playing the blame game, often with deadly consequences. Among those targeted in the 14th century as being responsible for the plague were Jews, Romani (gypsies), foreigners in general, religious pilgrims, witches, street beggars, lepers, and Catholic friars. The Jewish communities of Strasbourg, Mainz, and Cologne were decimated.

Just as witnessed with Covid-19, “miracle cures” were in abundance during the Black Death. Ineffective treatments included bloodletting and boil lancing. One suggested cure was drinking a concoction of milk and garlic cloves. Others included drinking a solution of ground chicken bones or cold water mixed with vinegar. Other remedies were to burn incense made of frankincense, myrrh, basil aloe, garlic, and grape leaves; inhale strong odors from latrines to overcome the infectious “vapors” of the plague; wash walls with a solution of water and vinegar; and maintain a diet of wheat bread and citrus fruits, while avoiding red meat. Those who believed the plague was a punishment from God engaged in self-flagellation processions through villages and towns. Today, certain world leaders have advocated bleach and disinfectants, vodka, herbal tonics, and ultraviolet and sunlight to cure Covid-19.

Authorities in Venice began requiring arriving ship crews to be kept on board their vessels for 40 days – what was called a “quarantine.” The practice continues to this day as a method by public health authorities to stop the spread of a contagion.

With a lack of workers, prices of commodities and the cost of labor rapidly increased as the plague spread throughout Europe and North Africa. With serfs able to negotiate labor conditions with landowners, the feudal system became a collateral victim of the Black Death. Laborers became free to shop around their services to the highest bidder and average wages doubled as a result. A mobile labor force soon emerged.

The Black Death’s aftermath created a political climate of mistrust of others, including foreign travelers, trading merchants, and money handlers. No one wanted a return to the 14th century, which was characterized in England as “nasty, brutish and short.” In England, cleric John Wycliffe questioned the authority of the Pope and advocated the pre-eminency of the Bible. Wycliffe was tried for heresy in 1377 but John of Gaunt, the king’s younger son and the top adviser to his father, defended Wycliffe and made it clear that the king also demanded more in taxes from the clergy. The Black Death paved the way for the Protestant Reformation in England two centuries later.

Edward III was, at the outset of the plague, the Donald Trump of his era. He insisted on conducting tournaments at Windsor Castle and other locations in England even though some of his royal advisers urged caution in the face of the Black Death sweeping England. Edward’s tournaments featured jousting, feasting, dancing, along with another unwelcomed addition – transmission of the bubonic/pneumonic plague through close social contact. It was not until the king’s 14-year old daughter, Princess Joan, who was en route to Spain to marry Crown Prince Pedro of Castile, died from the plague that Edward took notice of the gravity of the disease and that “eat, drink, and be merry” would only hasten the depopulation of his realm.

Joan, who died in Bordeaux, France, was Edward’s favorite child. When Edward’s much-beloved wife, Queen Philippa, died from the plague, Edward saw that his rule was in great jeopardy. He mandated English, not French, as the official language of his government and he agreed to personally address Parliament, which he had previously tried to circumvent at every turn. What occurred with the English royal family was akin to Trump having to deal with the Covid-19 deaths of his wife, Melania, and his favorite daughter, Ivanka.

In response to the Black Death, many monarchs banned the export of food, as well as prohibiting black marketeering. Populations tended to place more trust in local authorities for such basic needs as food, clean water, clothing, burial services, and such medical care as it existed. Some local authorities established plague hospitals, constructed lazarettos (quarantine housing), established “cordons sanitaires,” closed borders, and required the wearing of masks. Some local leaders established a network of intelligence agents to warn their governments of plague outbreaks and surges in other countries. The decisive actions of the Doge of Venice to quarantine arriving ship crews and create public health boards, the sealing off of Milan by the ruling Visconti council, and even the armed outlaws who guarded Bristol, England from those who may have been infected all tended to place increased public trust in their local governing authorities.

In Africa, populations living along the Nile River, where the plague was introduced by slaves and Arab traders, abandoned their river towns, including Asyut, and fled to remote areas up the Nile to escape the pandemic. The Arab scholar and historian, Ibn Khaldun, wrote that a spirit of “asabiyya” protected some North Africans from the plague. He defined “asabiyya” as a communal attachment to the land, whether it was the Sahara Desert or the Atlas Mountains. Ibn Khaldun points out that self-sufficiency and a shared commitment to the tribe is what saved to Bedouin and Sanhaja of the Sahara and the Berbers in the Atlas mountain range. The same degree of self-sufficiency and independence was seen in parts of Belgium, Switzerland, Bohemia, and Poland, as well as city-states in the Bight of Benin in West Africa that owed their allegiance to the Yoruba kingdom of Ijebu. They represented places where the Black Death had little to no impact.

We see the same reliance today on local authorities. Governors of states of the United States, Brazil, and Mexico are heeded by the populace over central government leaders. Regional groupings of American states – in the Northeast, Midwest, and West Coast – have stepped up to handle Covid-19 policy in the absence of any clear direction from the Trump administration. This support for local government is seen in polling that shows that 59 percent of Americans rate the Covid response by their local governments “excellent” or “good.” The numbers dramatically decrease when asked about the Trump administration’s response.

The same appreciation for local and state authorities exists in India. At the end of April 2020, the states of Goa, Sikkim, Nagaland, Arunachal Pradesh, Manipur, and Tripura were declared Covid-19 free. These and other Indian states that see a decrease in Covid infections will make every attempt to keep it that way. In India and other nations, internal border controls, health checks for travelers, increased local police authorities, and other measures may become permanent. And with such local and regional control will come a popular insistence on a devolution of other powers to state and local control, including public health, taxation, commerce, residency permits, and other functions.

The “asabiyya” concept of self-sufficiency to guard against repeat phases of Covid-19 and other pandemics may eventually lead to the formation, or re-formation in some cases, of the independent city-state and other polities that would have as their first priority the health safety and security of their compact populations, whether they are urbanized areas like Hong Kong, Singapore, Dubai, Venice, Barcelona, New York City, London, Gaza, Aden, Labuan, Sao Paulo, Istanbul, Mumbai, Karachi, Bangkok, Saigon, Shanghai, and Lagos or distinct regions and territories like the Basque country (which succeeded in surviving the Black Death virtually unscathed), Scotland, Kerala, Flanders, Puerto Rico, Sarawak, Sabah, American Samoa, Zanzibar, and Mindanao.

The activities of the Baltic trading bloc, the Hanseatic League, were largely suspended during the Black Death of the 14th century. We are already witnessing the suspension of certain activities of the European Union. Although the Hanseatic League existed on paper until the 19th century, the European Union may follow in its footsteps and become a mere paper organization, nothing more than a quaint notion but ineffective in a post-pandemic world. It is also noteworthy that the economies of Hanseatic League and Italian maritime republics, including Lubeck, Hamburg, Danzig, Amsterdam, Venice, Genoa, and Florence, improved more rapidly than national monarchies like France, England, and Spain in the aftermath of the Black Death.

Just as the Black Death altered the course of world history, so too might Covid-19. There are some 5000 geographic areas inhabited by homogenous peoples. If they decide that they will no longer be placed at the end of the line to receive medical and other assistance during a pandemic from their central governments, they may opt to go it alone.